News from the 5th edition of Nouvelle Prague showcase conference

By nimpe-publisher
Posted November 5, 2017
In News
News from the 5th edition of Nouvelle Prague showcase conference2017-11-052017-11-13https://nimpe.eu/newsite/wp-content/uploads/2017/05/newlogo-nimpe-small.pngNIMPE | Network for the Internationalization of Music Producers in Europehttps://nimpe.eu/newsite/wp-content/uploads/2017/11/npvf_symbol_logo-gray2017oedit.png200px200px
0

MESO events participated this year again in the 5th edition of Nouvelle Prague showcase Festival. Nouvelle Prague is the first-ever showcasing festival in the Czech Republic, primarily focused on overseas bands. Held in the Staropramen Brewery in the heart of the City, with its central European locations, terrific flight connections and storied history, Nouvelle Prague is an ideal location for a boutique, exklusive and targeted showcase event.

Showcase festival and music conference Nouvelle Prague, which was awarded soon after its 2014 premiere the Best New Showcase“ award at Yearly Music Convention Awards (YMCA) in UK, has received this prestigious music industry award again in 2015. In a poll of music professionals who attended The Great Escape Festival in Brighton, in May, Nouvelle Prague won the, Best Delegates category. 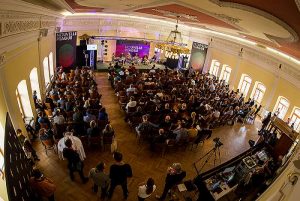 This year aiming to enhance interactions and to generate short /middle term cooperation between professionals /SME-s of the Central Eastern European countries, the showcase conference was linked to the V4 Roundabout working meetings, in which Georges Perot was also a participant, representing both the philosophy of networking of MESO events with the greek network of the Music Day organizers, and the European Music Day Association and the newly started initiatives of the European Live Music Association and the Network for the Internationalization of (young) Producers in Europe.

During Nouvelle Prague panels, many working groups and panels dicussed once more about the similarities and differences of each respective music industry landscapes, identifying common features and accessibility for neighbouring artists. Strong emphasis was given this year on creating small and tangible transnational collaborations between regional music scenes, intending also to explore the not so obvious ways that music related businesses and participants can harness new revenue streams.

And of course, there were also great live events and concerts that lasted till the first morning hours!

Co-funded by the Creative Europe Programme of the European Union

Send us an email and we'll get back to you, asap.